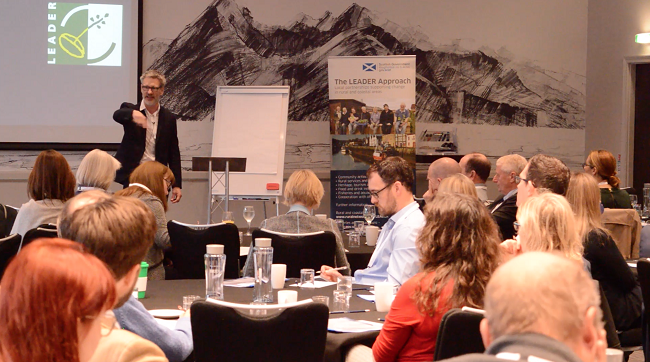 The aim of the event was to bring together influencers, practitioners, policy makers and researchers knowledgeable in the rural economy to discuss and make plans for what needs to happen to make rural enterprise a fundamental cornerstone of the Scottish economy.

The event was compered by journalist and broadcaster Clare English who opened the first session of keynote speeches. Catriona Maclean, Head of Rural Economy and Communities Division at the Scottish Government made the opening speech, focusing on rural communities and rural Scotland’s key resource – its people.

Robin McAlpine, Director of Common Weal gave an inspiring speech about the many opportunities for rural Scotland, specifically in adapting to climate change including carbon capture, renewable energy generation, forestry and wood processing.

Lorne Crerar, Chair of Highlands and Islands Enterprise spoke about how the rural economy is constituted differently from the rest of Scotland, with 9/10 rural buinesses being micro-enterprises and people twice as likely to be self-employed or have a second job in remote rural Scotland compared to other areas. He said the rural economy represents huge opportunity.

Dr Gary Gillespie, Chief Economist for the Scottish Government, talked about some key statistics as well as Scotland's Economic Strategy published in 2015. Dr Gillespie talked about the importance of natural capital as a real opportunity for remote and rural Scotland, including carbon capture, biomass etc. 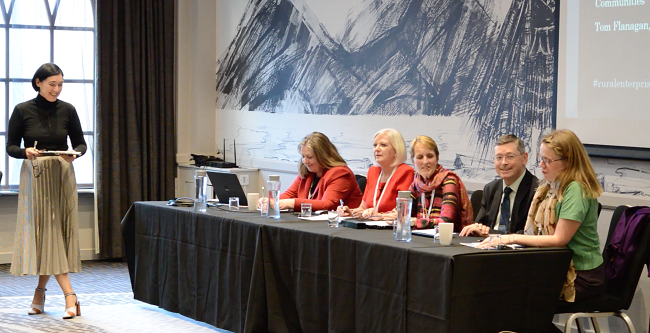 Workshops in the morning and afternoon were followed by a panel discussion.  The key themes that emerged throughout the day included:

In the afternoon the Cabinet Secretary for the Rural Economy, Fergus Ewing delivered a keynote speech. Mr Ewing used the opportunity to recognise importance of LEADER and EAFRD funding to deliver Community Lead Local Development (CLLD) and the fantastic work that LAGS and FLAGS from across Scotland have undertaken over the years, supporting entrepreneurship and innovation at a local level. He also thanked the Local LEADER teams who support applicants and see projects through to fruition.

"It really was a tremendous gathering and had all the ingredients of a really successful day."

"This conference brought a wide-ranging invited audience from public, private and third sectors together to discuss the contribution rural enterprise makes to the Scottish economy – and to consider how new opportunities are developing to make it even more important in the future. The LEADER LAG Chairs group hosted the event to highlight the valuable contribution LEADER has made to the development of the rural economy, and the importance of ensuring that a similar approach, with Community Led Local Development (CLLD) at its heart, is implemented to safe-guard the economic future of rural areas."

A detailed event report with outputs of workshops and with recommendations from the Chairs will follow soon and you can watch a short video from the event below.