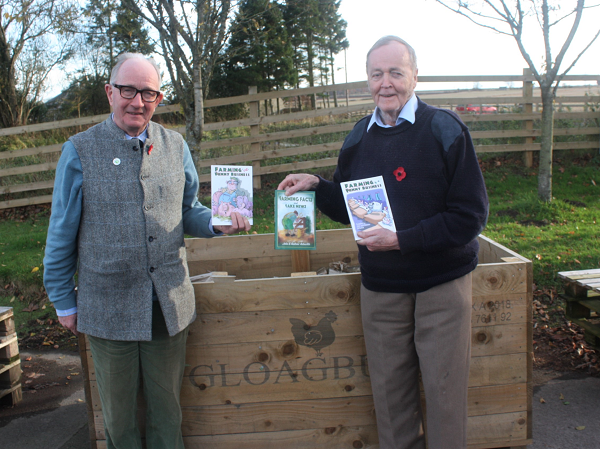 A series of three light-hearted books have raised over £100,000 for RSABI, the charity supporting people in Scottish agriculture.

The books, which are the perfect Christmas stocking fillers, were compiled by farming journalist Andrew Arbuckle with his late brother John also working on the first two titles.

With all profits from the books going to RSABI, Andrew Arbuckle’s aim with the books was to raise £100,000 for the charity, a target that has now been exceeded.

In between times, in “Farming Facts and Fake News”, the brothers pulled together a mix of essential information on all aspects of Scottish rural life, alongside many totally irrelevant, but entertaining, facts about farming, farmers and those who live in the countryside.

Andrew Arbuckle said: ““Over the years, I reported on farming events, I always enjoyed the funny stories told by friends and colleagues in the industry. It was good fun putting them together into books.”

Chair of RSABI David Leggat extended heartfelt thanks to Mr Arbuckle and the team behind the books for all their efforts.

He said: “We can’t thank Andrew, and his late brother John, enough for all their hard work on the books, which have raised such an amazing sum for RSABI. There was a real team effort behind the scenes to pull the books together and make them such a success – thanks to all involved, including RSABI’s previous Chair Ewan Pate who put a great deal of work in.

“We’re very grateful to all the contributors who sent in their funny stories for the books – from all corners of the Scottish agricultural community and beyond. Thanks also go to all who bought the books – either to read themselves or to give as gifts.

“The volumes have been a wonderfully successful fundraiser for RSABI, with all sales helping us to provide vital support to people in the Scottish agricultural industry.

“As well as raising a fantastic amount, the books have also brought smiles and laughter to the agricultural community.”

All three books are available for sale through RSABI’s online store available at www.rsabi.org.uk or by calling 0131 364 4205.

RSABI provides emotional, practical and financial support to people involved in the Scottish agricultural industry. Their telephone helpline is open every day of the year from 7am to 11pm on 0300 111 4166.