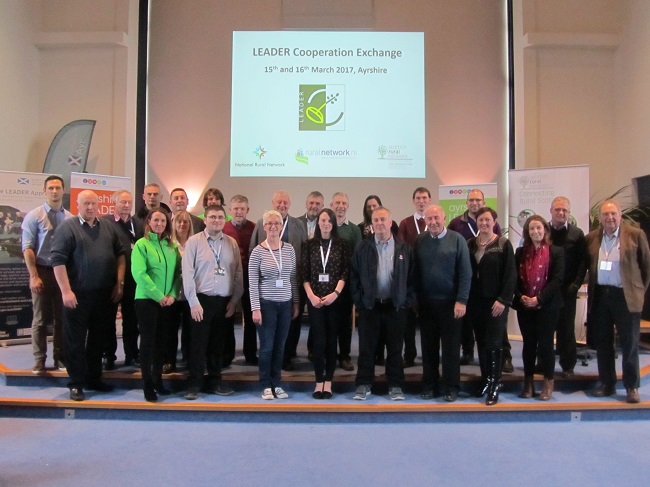 Skiffs, trails and augmented reality. You might ask what these three things have in common.  Well, they were among the many ideas discussed at the LEADER Cooperation Exchange event on 15 and 16 March in Ayrshire.

Twenty five Local Action Group (LAG) representatives from Northern Ireland, Republic of Ireland and Scotland gathered in Ayrshire to develop their ideas for cooperating with each other. Some great ideas for joint projects on boat building and racing, heritage and coastal trails, textile tourism and industrial heritage were developed in a little over 24 hours.

The main objectives of the event were to:

The first day started with a warm welcome from Elinor Mitchell, Director for Agriculture and Rural Economy in the Scottish Government, and from Chris Savage, Chair of Ayrshire Local Action Group. The attendees then participated in a 'Cooperation Cafe' to generate ideas and were then led through a series of discussion rounds to develop ten ideas into potential projects.

The second day started with a very interesting visit to Maidens Boathouse. Participants heard about how LEADER funding had enabled Carrick Coastal Rowing Club to build the boathouse, which now provides a space for members of the club and local schools to get involved with building and rowing skiffs. They are doing a great job of reconnecting the community with its nautical heritage and passing on related skills to future generations.

We then travelled to the Carrick Centre in Maybole, where a range of local projects funded by Ayrshire LEADER generously gave up their time to talk to the participants about their projects. We heard about how the Barony Centre had transformed the town centre in West Kilbride from having more than half of their retail units empty and boarded up, to having almost all of them full and thriving. We also heard about how the Girvan Town Team plan to use augmented reality to market a new town-based digital tourism experience and how Adventure Carrick are helping to turn south west Scotland into a top visitor destination for outdoor activities.

The event concluded with a discussion on the next steps for the potential cooperation projects identified by participants. Hopefully we will see some of the ideas turned into concrete projects and the Scottish Rural Network stands ready to assist with that.

The event was organised jointly by the Rural Networks in Ireland, Northern Ireland and Scotland. Ayrshire LEADER were fantastic hosts and were vital in making the visit very informative and enjoyable for the participants.

More from the event

In the guest blog Reflections from our visit to Ayrshire Dr Therese Conway from the National Rural Network in Ireland and Eamon McMullan from the Northern Irish Rural Network reflect on the event.