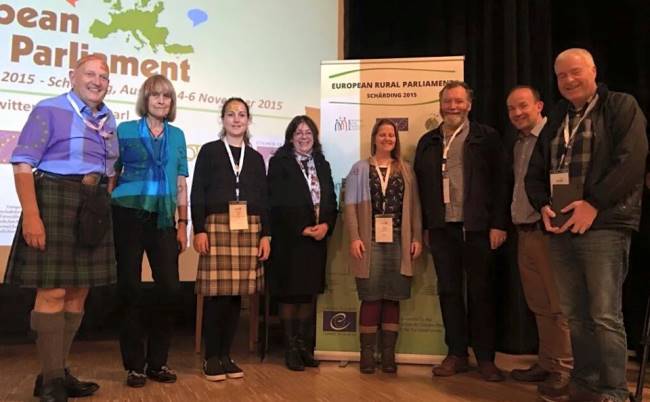 Derek Harper, Chair of the local liaison group for the 2016 Scottish Rural Parliament event was part of the Scottish delegation to the European Rural Parliament (ERP) event held in Schärding, Austria last month. Here, he shares his reflections on the event. We'll have more from other attendees from Scotland over the next couple of weeks.

What was the event about and why did you attend?

My participation in the European Rural Parliament event was unexpected, therefore I came to it all quite fresh. I hoped to gain a better understanding of the whole Rural Movement, determine the main organisations and people driving it and make salient connections that would benefit my home county of Angus and the Scottish Rural Parliament.

What were the key points that you took from the event?

What struck me the most was there were common issues and themes that were similar across the countries participating and indeed equally the desired outcomes. Likewise that this 'Rural Movement' was here to stay and getting larger and stronger in its convictions evidenced by the ERP manifesto the delegation painstakingly delivered late Friday afternoon. But it was Mr Michael Dower, in his 80s I believe, his endurance through the few days was outstanding, his depth of knowledge and instant recall was amazing and empowering, a true visionary leader.

What was the best thing about the event?

For me what I enjoyed the most, was the luxury of spending quality time with the Scottish delegation, like-minded folk that were motivated to make positive changes in the rural community. This was the same with people I met from several countries, it's rare to have this kind of opportunity to have the time for in-depth conversations. The fantastic host town Scharding and venues enabled a relaxed atmosphere and thus many deep conversations and interactions.

Is there anything you will do as a result of attending the event?

With my home Brechin playing host to the next Scottish Rural Parliament in 2016, I gleaned an incredible amount of understanding of all aspects of the event. From the field trips, workshops and the gala dinner. This gave me an invaluable first-hand account of the whole process and how we can showcase the great assets and qualities of Brechin and Angus.

I have written, and will be writing to, several people that I made contact with at the event for varying reasons. First of all to thank them for their time and offer any assistance in their endeavours to further their particular cause. Hopefully we can invite them to our events next year in Brechin show them first hand what's happening in Angus generally. Ultimately to stay in touch and learn from their vast experience in their given field and to drive the rural movement forward to achieve its objectives.

Visit the Scottish Rural Parliament website for more on next year's event to be hosted by Brechin.

And check out Norman MacAskill's blog Seven thoughts on the European Rural Parliament.