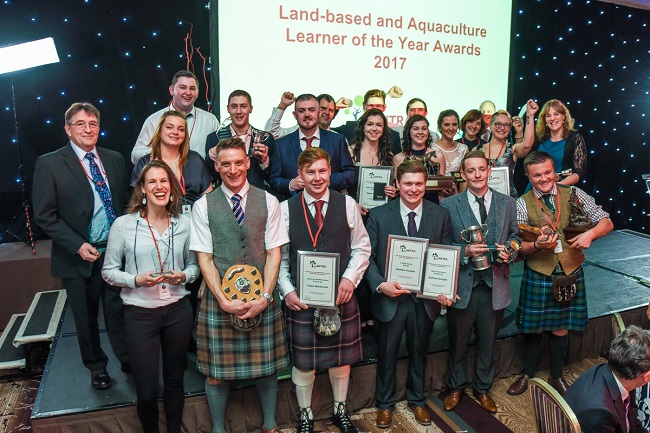 A forestry apprentice from Dumfries took home the top prize at Lantra Scotland's fifteenth Land-based and Aquaculture Learner of the Year Awards.

Emma Staniforth was awarded the Overall Winner at the ceremony in Dunblane on 2 March 2017. Stuart McKinlay, a fisheries management apprentice from Deanston in Stirling, took the runner-up spot. Emma also won the Trees and Timber Learner of the Year Award, while Stuart won the Fisheries Management and Environmental Conservation category.

Emma has been doing a Modern Apprenticeship SVQ Level 3 in General Woodland and Treework through Forest Enterprise Scotland. She began her SVQ with no prior knowledge or practical experience of forestry, then went on to gain certificates in the use of forestry equipment at her first attempt and completed her SVQ Level 2 within 15 months of starting her new career. Her ambition is to own some woodland, either privately or through community ownership, and use it as a teaching centre for community groups.

"I can’t believe I’ve won two awards and to be chosen as the overall winner is the icing on the cake. It’s fantastic news and a great achievement for me. I’m delighted with the support I’ve had from my employer, the hard work I’ve put in has really paid off. I’m honoured to have represented Forest Enterprise Scotland and their apprenticeship scheme at Lantra’s Learner of the Year Awards."

The awards were presented to trainees at the glittering ceremony and gala dinner by farmer and TV presenter Adam Henson. Speaking at the event, Adam reminded the audience of the importance of fostering new talent and investing in skills to ensure a lasting future for Scotland’s food and drink sector and the wider rural economy.

"I’ve really enjoyed presenting these awards and meeting Scotland’s top trainees and learners from the land-based and aquaculture sector.

"It’s inspiring to see such talented people getting the support of employers and training providers as they start their careers within these key industries.

"As well as congratulating everyone nominated for Lantra’s learner of the year awards, I’d particularly like to say well done to the winners and the runners-up. It really is a fantastic achievement and I’m sure winning these awards will be great for their prospects and their self-confidence."

You can find out more and see the full list of award winners on the Lantra website.

Lantra Scotland is supported by the Scottish Government.