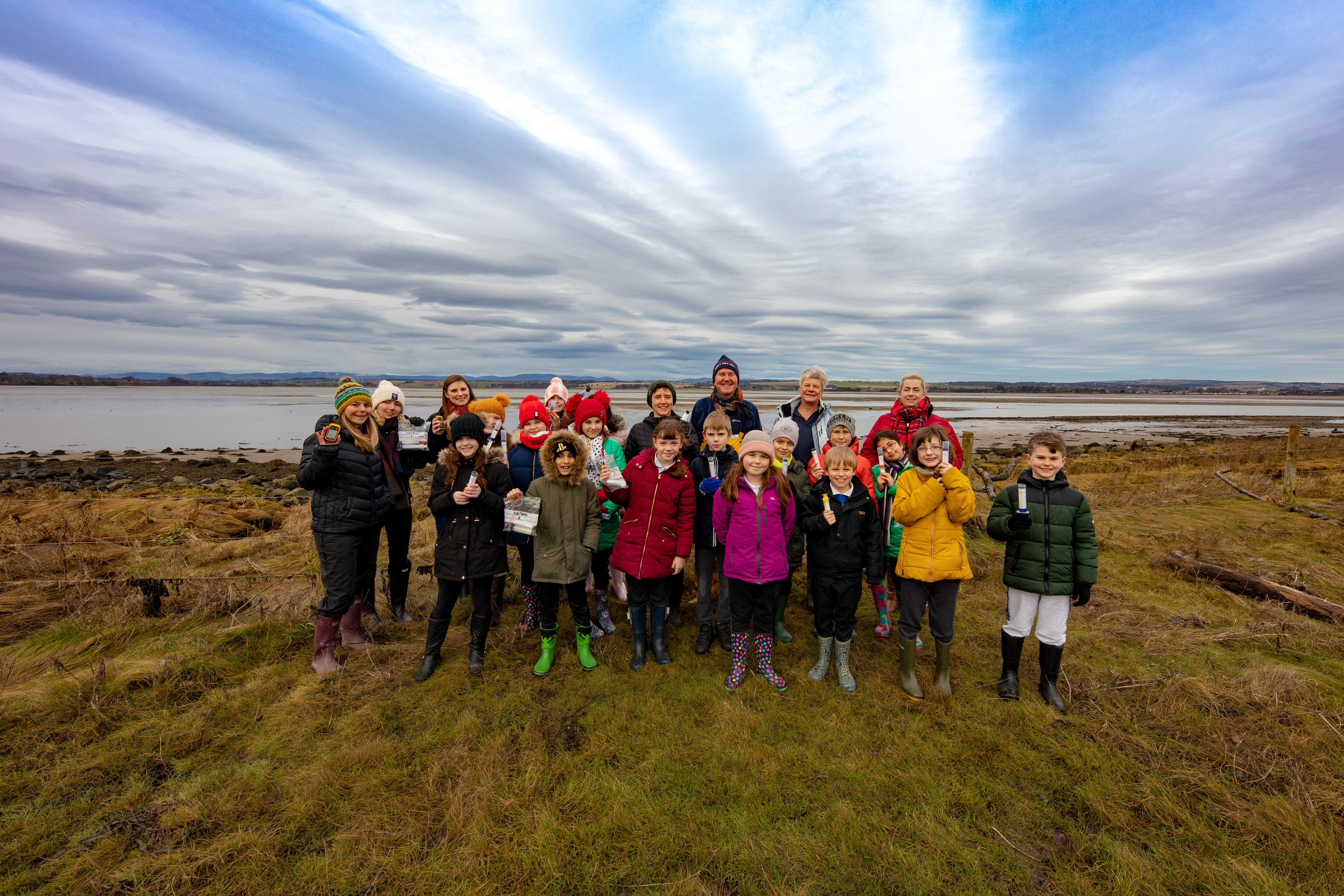 The children joined scientists from the University of St Andrews, naturalists from the Scottish Wildlife Trust and the Minister in collecting soil samples from the Montrose Basin saltmarshes to contribute to a national carbon stock assessment of our coastal wetlands. The citizen science project aims to encourage schools, children and students to collect samples, complete tasks and follow the progress of the project online to build a map of Scotland’s blue carbon resources.

Oceans play a vital role in trapping and storing atmospheric carbon dioxide (CO2) that would otherwise contribute to global warming. Blue carbon refers to the carbon stored in marine habitats, such as saltmarshes. These marine ecosystems are highly effective at capturing CO2 and storing carbon in organic-rich soils, often over thousands of years. The degradation or damage of these ecosystems may cause carbon to be released from the soil stores back to the atmosphere, at the same time compromising their ability to capture and store carbon in the future.

Researchers from the University of St Andrews School of Geography and Sustainable Development have been working in partnership with the Scottish Government to better understand the role Scotland’s ‘blue carbon’ resources might play in mitigating and adapting to climate change.

The launch of the blue carbon citizen science project coincides with the start of the 2019 United Nations Climate Change Conference, COP25 in Madrid which starts today (Monday 2 December). Carbon capture and storage will be included in wide-ranging discussions on how the international community works together to tackle climate change.

Ms Gougeon said: “I’m delighted to be launching this blue carbon citizen science project developed by St Andrews University. We need to support more children to learn and understand the vital role Scotland’s coasts and waters can play in helping to tackle climate change. They want to play their part and projects like this will help them do just that by providing these valuable data.”

Professor Bill Austin, from the University of St Andrews School of Geography and Sustainable Development, who is currently working with the Scottish Government to support blue carbon policy development said: “The significance of long-term carbon storage in Scotland’s coastal habitats is important because these stores are vulnerable to degradation. If we can protect these carbon-rich ecosystems we can prevent the release of greenhouse gases, support their rich biodiversity and improve their resilience to future sea-level rise. The overall aims of this work will be to undertake a national scale assessment of the blue carbon stocks in our coastal vegetated habitats and to better inform and understand the potential of accounting for Scotland’s vast blue carbon resources.”

Professor John Baxter, Chair of the Scottish Blue Carbon Forum, added: “The development of a citizen science programme to engage a new generation of young people in Scotland with our coastal and marine environments is very encouraging. I am delighted that the work of the Scottish Blue Carbon Forum is being promoted to a wider audience and that some of the early career researchers funded by the forum are supporting this educational outreach programme today”