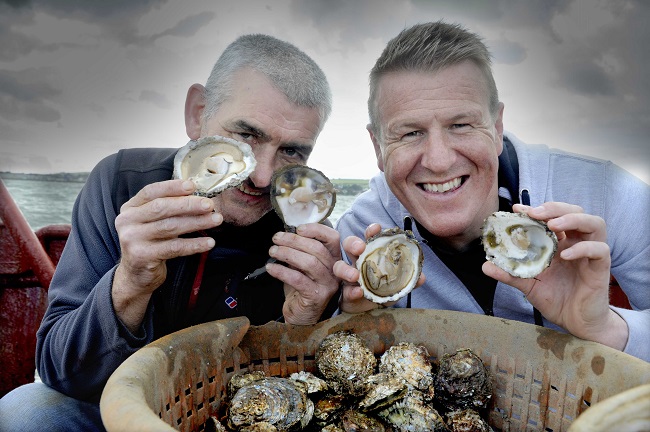 On 1 September, Scotland's native oyster season opened with the landing of the first Loch Ryan oysters.

The race is now on to gather a tonne of native oysters, most of which will be enjoyed by visitors to the Stranraer Oyster Festival, which is taking place from 13-15 September.

Famously native oysters can only be harvested in months with an ‘R’ in them, avoiding the summer breeding season. Scotland's native oyster fishermen will return 95% of all the oysters they catch back to the sea to help Loch Ryan's precious native oyster bed to grow.

The packed programme of events includes the #ShuckOff, where more than a dozen of Scotland’s top seafood chefs will compete to be named Scottish Oyster Shucking Champion. There’s also a host of cookery and cocktail demonstrations, live music, artisan produce and family activities; including the harbour-side Extreme Pond Dipping challenge, where children can explore creatures found at the bottom of Loch Ryan.

"It was fantastic to be out on the Vital Spark oyster boat at the start of the native oyster season, and to get a personal oyster fishing lesson direct from Scotland’s native oyster experts. The story of these oysters is just fascinating, and it’s great to hear they’re in such high demand in some of the world’s top restaurants.

"Before Stranraer Oyster Festival started three years ago it was almost impossible to find these in Scotland. A big part of Stranraer Oyster Festival is about making our iconic local produce accessible to local people and visitors alike, and we are once again looking forward to introducing more people to native oysters in just over a week’s time."

"We are delighted to work closely with Loch Ryan Oyster Fishery who have supported Stranraer Oyster Festival from the very first spark of an idea into what has now become one of Scotland’s most exciting food festivals.

"It is a privilege for the festival team to be involved in landing the first native oysters of the season. As we put the finishing touches to this year’s remarkable oyster festival it’s a real honour to spend a few hours on the Vital Spark experiencing the beauty and the majesty of this loch and learning more about the precious oysters hidden beneath its waters. They truly are the jewels in Stranraer’s crown and we are looking forward to sharing them with visitors to Stranraer Oyster Festival."

"Dumfries and Galloway Council is delighted to support the third Oyster Festival. The Festival’s success over the last few years has been thanks to the Development Trust, many volunteers and the local community. This year’s Festival once again will celebrate Loch Ryan, our local food and drink industry and provide a huge economic boost for Stranraer and the wider Wigtownshire area."

Stranraer Oyster Festival is part of Scottish Food & Drink Fortnight, the two week promotion of Scottish produce which launched yesterday. The festival includes a celebration of local and regional artisan produce, which has been supported by Connect Local’s Regional Food Fund.

The full Stranraer Oyster Festival programme can be downloaded from www.stranraeroysterfestival.com