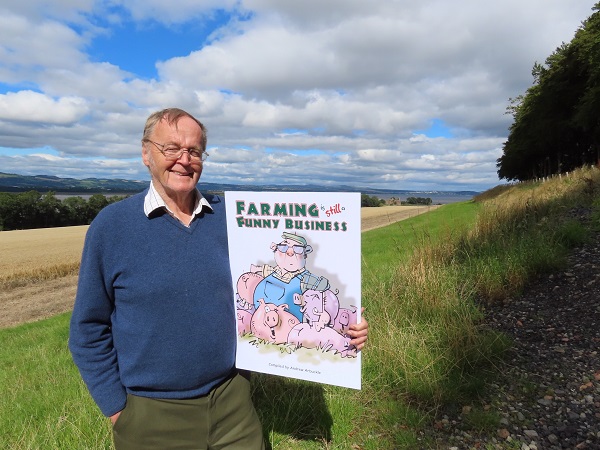 A brand new book of light-hearted anecdotes and stories from the Scottish agricultural industry will be launched in the coming weeks.

The new book, “Farming is Still a Funny Business”, which has been compiled by farming journalist Andrew Arbuckle, is now available to pre-order, ahead of its full launch in October.

All the profits from the new book will go to RSABI, the charity which supports people in Scottish agriculture and it is hoped the publication will prove a huge hit as the perfect gift this Christmas.

RSABI, which supports people in Scottish agriculture, hopes the book will also raise the spirits of farming and crofting communities at this very challenging time for everyone.

The charity recently delivered a major #KeepTalking campaign to encourage those working in Scottish agriculture to keep in touch and support each other during a time when many of the usual social events like agricultural shows are not going ahead.

The latest initiative follows two previous books compiled by Mr Arbuckle and his brother John, which have collectively raised over £72,000 for RSABI. Mr Arbuckle hopes that the proceeds of the third book will take that total to over £100,000.

The brothers were delighted with the huge success of their previous books –  “Farming is a Funny Business” and “Farming Facts and Fake News”. The hope is that the new book will raise a smile among those in the farming community, as well as valuable funds for the leading Scottish agricultural charity.

The new book includes anecdotes from farmers, auctioneers, journalists, vets and many others involved in the farming community who kindly contacted Mr Arbuckle to offer their stories for the book.

“I am extremely grateful to those who took the time to contact me with their story suggestions,” he said.

“The content I received was very wide-ranging and, while it was not possible to include every quirky tale sent in, I very much hope the selection which has made it into the book might prove to be a useful record of farming experiences, as well as providing an entertaining read.”

The book also includes colourful cartoons from former Cartoonist of the Year Brian Petrie as well as sketches by Graham Lang. Mr Arbuckle said his hope was that the book would prove a popular stocking filler purchase ahead of the festive season.

Nina Clancy, Chief Executive of RSABI, extended sincere thanks to Mr Arbuckle for all the time and effort which has gone into collating the new book.

“Recent months have been incredibly tough time for everyone and we are also extremely grateful to everyone who took the time to contact Andrew to share their memories of fun and light-hearted experiences which I am sure will raise the spirits of those who read the book.”

Ms Clancy said she was delighted with the response from so many people in the farming industry who had taken the time to offer stories for the new publication.

The new book – “Farming is Still a Funny Business” is available for pre-order from RSABI’s online shop: http://bit.ly/FarmingisStillaFunnyBusiness

The new title will also be available to buy, along with the previous books “Farming is a Funny Business” and “Farming Facts and Fake News” via the online shop at www.rsabi.org.uk and at retail outlets throughout the country.

RSABI has a team of dedicated staff who provide vital financial, practical and emotional support to individuals and families with links to Scottish agriculture. The charity also offers support through its helpline, 0300 1114166, which is open from 7am to 11pm, 365 days a year.

Photo - Andrew Arbuckle pictured with the cover of new book – Farming is Still a Funny Business.