Public asked to look out for young puffins

Public asked to look out for young puffins 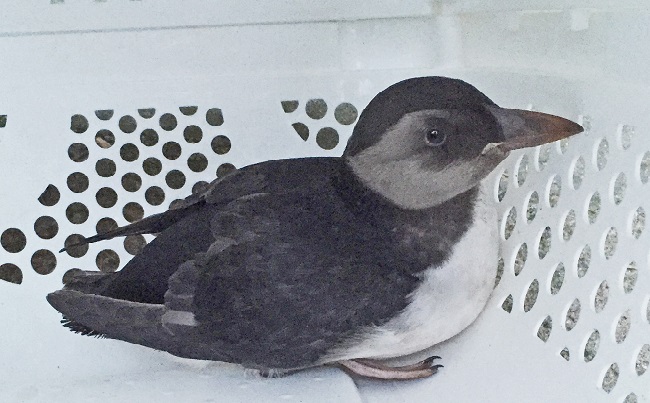 The Scottish Seabird Centre is asking the public to keep an eye out for young puffins that may need rescued.

After leaving their burrows on the island of Craigleith, just offshore from North Berwick, some pufflings become disorientated by lights from the mainland. Their first-ever flight may see them flying into town and seeking somewhere dark to hide from predators often underneath cars and under plants in gardens.

The Seabird Centre was involved with its first rescue of the season on 28 July, when a puffling was found under an ice cream van. The puffling - named Mr Whippy - was safely caught and taken to the Centre by Seabird Member, Mike Thornton.

"The puffling itself was fine though a little confused and scared. I waited until sunset before releasing it by the old pier just as high tide was spilling over onto the surface. It flew out of my hands and gently landed on the water a metre away from the pier, before diving a few times. It then started to paddle itself out towards the Lamb, looking quite happy and calm."

To help raise awareness, the North Berwick Wildlife Watch has produced a great short video with award-winning photographer Barrie Williams. The video gives step-by-step guidance on what to do if you find a puffling. You can watch the video below or on YouTube.

"Pufflings look completely different from their adult counterparts, so often people don’t realise what they can see is a puffling! They are shades of grey, white and black; their smaller beaks don’t have the characteristic bright colours that the adults have in summer.

"It is a crucial time in the puffin season and we want to ensure as many as possible of these wonderful seabirds make it out to sea. We are appealing to people to please contact us if they do spot a puffling – and also to watch the fantastic video created by Barrie and North Berwick Wildlife Watch, so they know the best way to deal with these amazing seabirds."