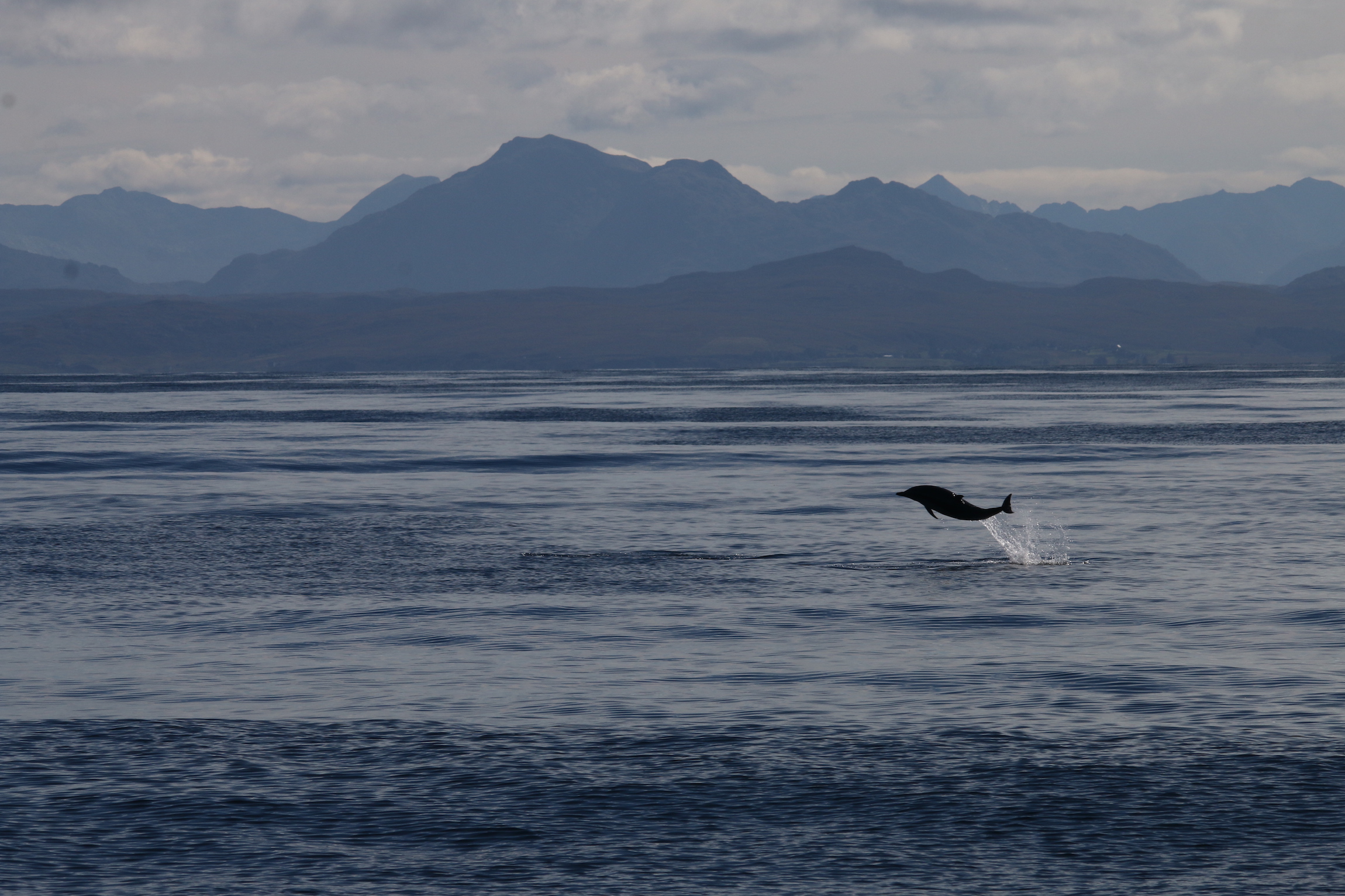 Record numbers of volunteers took part in research expeditions organised by the Hebridean Whale and Dolphin Trust last year, helping to launch a new year-round programme of monitoring marine mammals and basking sharks in the Hebrides.

For the first time, the conservation charity carried out marine surveys from its specialized research yacht Silurian during the winter months – with crucial data collected every month of the year about the presence and behaviour of some of the country’s most spectacular marine wildlife.

Scotland’s west coast seas are globally important habitats for cetaceans – the collective name for whales, dolphins and porpoise – plus the endangered basking shark. But so far there has been little year-round data about these animals in the region.

“Our new winter surveys and the contribution of our wonderful volunteers offer us the opportunity to study the year-round presence and distribution of some remarkable species for the first time,” said Becky Dudley, Marine Biodiversity Officer at the Hebridean Whale and Dolphin Trust.

“Our established summer expeditions, when most species are present in Hebridean waters, remain vital. But embarking on year-round surveys will shed new light on marine wildlife, and help us answer questions such as whether minke whales are present in the Hebrides all year, and if distribution of harbour porpoise changes between summer and winter.”

As well as increasing understanding of cetacean and basking shark behaviour, this groundbreaking research helps detect trends and changes in the marine environment – including increases in underwater noise pollution and emerging threats like entanglement. All of this scientific evidence can then be used to inform action to protect marine wildlife.

In 2019, Silurian covered over 5,000 nautical miles during 23 research expeditions – stretching from as far north as Cape Wrath, south to Islay and Jura, and as far west as the Flannan Isles.

The expeditions depend on paying volunteers, who work as citizen scientists alongside researchers. Last year saw a 24 per cent increase in the number of these volunteers, with more than 120 individuals notching up over 700 hours of surveying. They helped record more than 1,200 sightings of over 3,300 individual animals, including 2,740 individual cetaceans, 589 seals and 40 basking sharks.

Already in this first year of year-round surveys, the team recorded four species of cetacean – common dolphins, harbour porpoise, killer whales and minke whales – in the winter months. These sightings add to a growing body of evidence that the Hebrides is an important area for certain species year-round. In total, nine marine mammal species were recorded in 2019 – the others being bottlenose dolphin, common seal, grey seal, Risso’s dolphin and white-beaked dolphin.

Bruce Crawford, a volunteer who has joined the Trust onboard Silurian during both summer and winter surveys, said: “The Trust’s surveys are among my most memorable experiences. It’s an amazing feeling to know this work could help secure the future of these remarkable marine animals. I was part of a great team, which recorded sightings, assessed human impacts on wildlife such as marine debris, monitored sounds with an underwater microphone, and identified individual cetaceans through photography. We also had chance to explore some of Britain’s most remote and beautiful places.”

Highlights during 2019 included two exciting encounters with killer whales. One was with Busta, a well-known male from a group called the Northern Isles Community, mainly seen around Orkney, Shetland and Scotland’s north coast. The other, off Ardnamurchan, was with males John Coe and Aquarius – part of a pod known as The West Coast Community, which is most often seen in the Hebrides and is at imminent risk of extinction.

The research expeditions are part-funded by Scottish Natural Heritage. Fiona Manson, SNH Marine Advisory Officer, said: "We're delighted to support the Trust's research expeditions, and it's great to see so many volunteers getting involved. With their help we are increasing our knowledge of a wide range of internationally important species in Scottish waters throughout the year, which will ensure that we can target conservation measures where they are most needed in future."

With marine mammals at risk from human activities including climate change, entanglement, pollution, underwater noise and habitat degradation, ongoing and long-term research is crucial to improve understanding of the impacts, and how to protect cetaceans. Findings from Silurian’s expeditions have contributed to the designation of a protected area for harbour porpoise and the identification of proposed marine protected areas for Risso’s dolphins, minke whales and basking sharks.

Since 2003, Silurian has travelled over 120,000 kilometers – equivalent to almost three circumnavigations of the world. The research has advanced understanding of resident and migratory species, with key findings including that the Hebrides is one of Europe’s most important areas for harbour porpoise.

Volunteers can join Silurian’s research expeditions this year for trips lasting one or two weeks. Anyone can take part, with some special trips for 16 to 17 year olds. Participation costs cover boat expenses, accommodation, training, food, and support the charity’s research. Visit hwdt.org/silurian for details, or contact info@hwdt.org or 01688 302620.