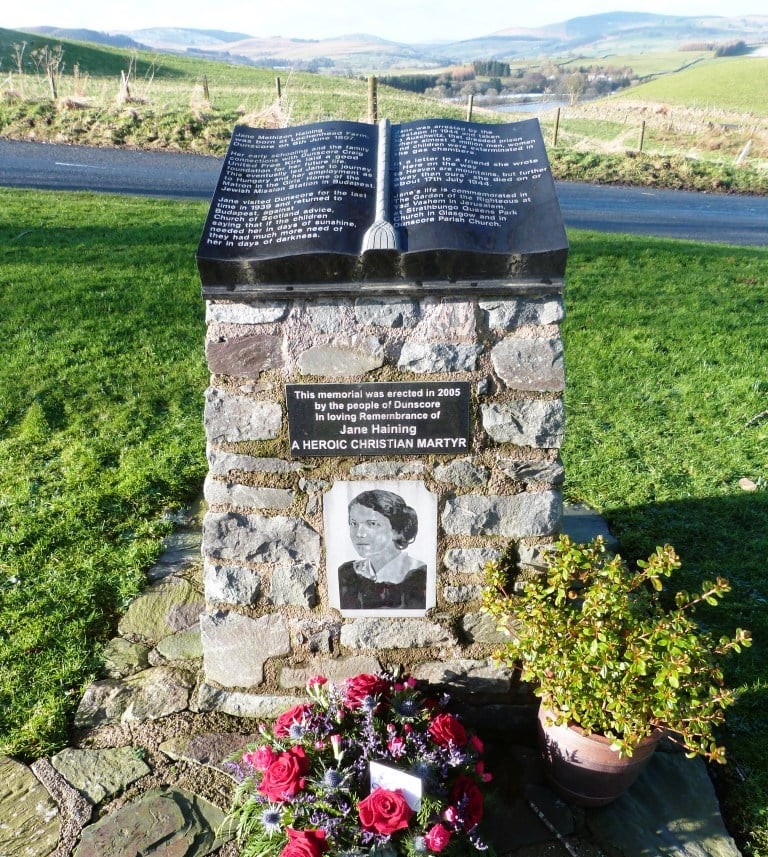 To mark Holocaust Memorial Day on 27 January, we take time to commemorate Jane Haining, a farmer’s daughter from rural Dumfriesshire who is the only Scottish woman to be honoured as “righteous among the nations” – the term used for non-Jews who risked their lives to protect Jews from extermination.

Jane was a Scottish missionary who, deeply committed to her faith, sacrificed her life for her ideals. It was her calling that took her away from her native Scotland, first to the Hungarian capital Budapest, and finally to Auschwitz concentration camp, where she perished.

Born in 1897, on a farm near Dunscore, Jane Haining was a talented and adventurous young woman who secured a scholarship to nearby Dumfries Academy and left as Dux of the school.

In 1932, she became matron of the Girls’ Home of the Scottish Mission in Budapest and dedicated the remainder of her life to caring and teaching girls in the school next to the Home. Responsible for some 400 children aged from 6 to 16 - predominantly Jewish children, many of them orphans - she was loved and respected by the students as well as her colleagues.

In March 1944, the Germany army occupied Hungary and soon began the mass deportations of the country’s Jews to concentration camps. Despite countless orders and entreaties to return home to safety, Haining was steadfast in standing by “her” children; when Haining was arrested by the Gestapo, she was the only foreigner left working at the mission.

On 25 April 1944, two Gestapo men appeared at the Mission, searched her office and gave her 15 minutes to get her things ready. She was taken first to a local prison for questioning. Eight charges were laid against her, including working among Jews, weeping when putting yellow stars on the girls, visiting British prisoners of war and listening to the BBC.

Haining was then deported to Auschwitz concentration camp where, as prisoner number 79467, she was forced into hard labour. Her last message to friends was a postcard asking for food. Haining survived just two months in Auschwitz, she may have died of starvation, illness or disease or been murdered in a gas chamber like many who became too ill to work. She was 47 years old.

The heroism of this ordinary yet extraordinary woman has since been recognised. In 1997, Yad Vashem, Israel's Martyrs' and Heroes' Memorial Authority, honoured Haining as Righteous Among the Nations. Her name is inscribed on a wall of honour in the Garden of the Righteous in Jerusalem.

In 2010 the city of Budapest renamed a section of the embankment along the River Danube – Jane Haining Rakpart – in her honour. And in 2019, Hungary’s annual March of the Living, attended by upwards of 10,000 people and marking the country’s Holocaust Memorial Day, was dedicated to the memory of Haining.

Closer to home, Haining was posthumously awarded a Hero of the Holocaust medal by the UK government in 2010, while two stained glass windows bear tribute to her “service and sacrifice” at her former church in Queen’s Park, Glasgow.

A heritage centre at the church in the village of Dunscore was opened in January 2018, and includes artefacts such as her will, her last letter from Auschwitz and a cherished book of wildflowers, which she won as a school prize and took with her to Budapest. A Jane Haining heritage trail in the lanes around the village takes in the stunning Cairn Valley scenery and visits the farm where she was born and brought up, her school and the church. Nearby is a cairn in her memory, erected by the community of Dunscore.

As people across the world mark Holocaust Memorial Day to reflect on the past and strive towards a better future, Jane Haining’s selfless bravery and unwavering devotion to her children should not be forgotten.