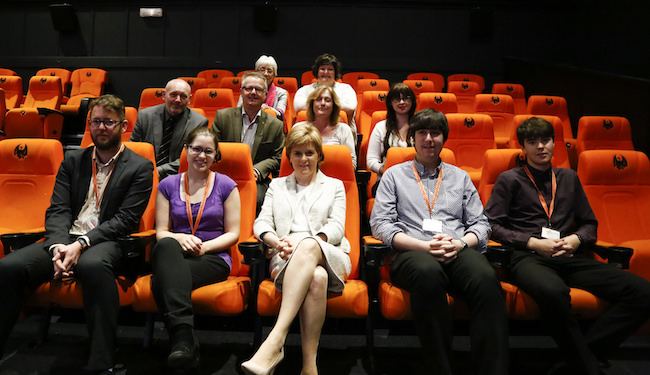 Nicola Sturgeon announced that the new Scottish Rural Development Programme (SRDP) Broadband Grant Scheme is now open for applications on a visit to Oban's Phoenix Cinema where a new wifi tourist information kiosk has been installed.

The £9 million fund will be used to support community-led broadband projects similar to GigaPlus Argyll – a ground-breaking scheme where groups of hard-to-reach communities get together to procure super-fast broadband services from commercial providers.

"Superfast broadband is being rolled out across Scotland with Scottish Government support, and we are more than halfway towards meeting out target under the Digital Scotland Superfast Broadband (DSSB) Programme. The social and economic benefits are clear, as demonstrated by this innovative and accessible wifi tourist information kiosk in Oban’s Phoenix Cinema.

"This SRDP funding will help communities in the hardest to reach broadband areas follow in the footsteps of the pioneering GigaPlus Argyll project, and work together to bring superfast services to homes and businesses.

"This scheme takes the available funding for community broadband projects up to £16.5 million in Scotland, over and above the £400 million DSSB investment. It is another step to achieving the Scottish Government’s aim of delivering world class connectivity by 2020 and, enabling people across Scotland to connect any time, any place, anywhere, using any device."

"The Phoenix already has wifi which is hugely popular with local customers and tourists, but superfast broadband will make a massive difference to our cinema. It will make it much easier and faster for us to access the latest releases, as well as enabling us to screen live-streamed events."

“Access to high speed, robust, broadband has a transformational effect on how people live, work and learn, particularly in our most remote and rural communities. Our role at CBS is to help communities find innovative solutions and GigaPlus Argyll is a great example of an innovative business model that will bring transformational and robust broadband to the most remote of premises across eight island and mainland communities. The SRDP scheme will enable us to help even more rural communities across Scotland get digitally connected.”

Eight island and mainland communities on the west coast of Scotland have joined forces with Community Broadband Scotland (CBS) for the community-owned GigaPlus Argyll project.

“Broadband connectivity in the GigaPlus Argyll area is poor, with speeds less than 2 Mbps, and our communities on the islands and Craignish peninsula are outside the reach of the Digital Scotland Superfast Broadband fibre scheme. By getting together with CBS, we have been successful in securing tenders and appointing a company specialising in the installation and operation of wireless superfast broadband which will deliver affordable services to 1,400 homes and businesses, opening up huge opportunities for us.”