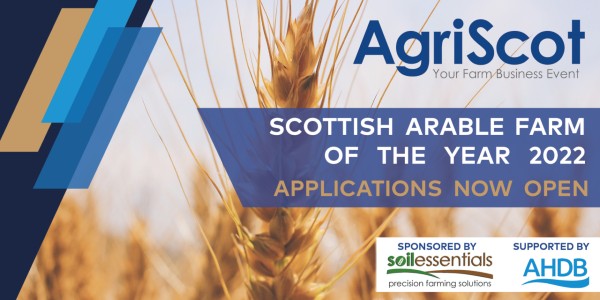 AgriScot Scottish Arable Farm of the Year Award applications are now open, with a deadline for submission of 20th June 2022.

The award, first made in 2017, has traditionally looked for entries later in the summer, with on farm assessor visits taking place in October. This year, however, organisers have decided to open up the award earlier, so that farms that have made the final short list can be visited pre-harvest.

“We are absolutely delighted that we are once again able to run the Scottish Arable Farm of the Year Award. It is great to be working alongside AHDB as facilitators and SoilEssentials, our sponsor, to launch this year’s award.”

“We are calling for nominations and entries over the next six weeks, and our assessors aim to then produce a short list of three farms to visit in July. This timing is new for 2022, but we believe it gives farmers a better opportunity to show crops and farms looking at their best at a potentially less busy time of year.”

“The 2021 Arable Farm of the Year award was awarded to Preston Hall farm in Midlothian with the other two shortlisted farms both hailing from Aberdeenshire so this year we are keen to encourage farms from all over mainland Scotland and the Islands to put themselves forward, or to hear from agronomists, machinery suppliers and others – anonymously if necessary – who wish to nominate their customers, clients and neighbours as deserving of the 2022 title.”

John Weir will be joined by Bill Gray from Preston Hall farm, holder of the current title of Arable Farm of the Year, to assess this year’s entries.

Gregor Welsh, General Manager at SoilEssentials and sponsors of the award is pleased to be involved. “We are continually fascinated by the award finalists, having the insight into their individual farming businesses and inspiring stories each year, so we would actively encourage submissions from the length and breadth of Scotland.”

The roll call of previous arable farm of the year award recipients represents a fair spread of the arable areas of Scotland:

The AgriScot Scottish Arable Farm of the Year is sponsored by Soils Essentials and supported by AHDB.

AgriScot takes place on Wednesday 16th November 2022, at the Royal Highland Centre, Ingliston. The awards will be presented at this event.