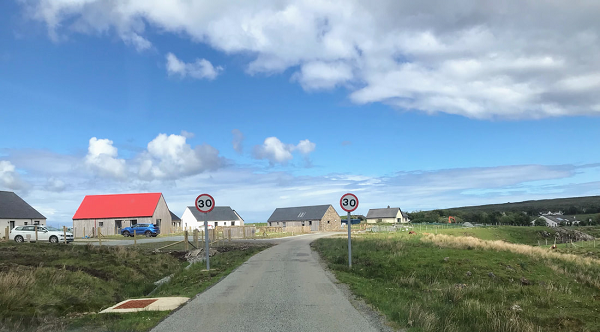 The new community-owned housing, health and business development in Staffin, Skye, has won a national award.

The Scottish Homes Awards 2022 were held in Glasgow's Hilton Hotel on 23 June, and recognise excellence in the new build housing industry.

Families moved into the six three-bedroom homes at Taighean a' Chaiseil, Stenscholl earlier this year. The £1.6million development won the Community Contribution Award which recognises the efforts of ‘delivering a significant contribution to a local community’.

As well as the new homes, the site also houses a brand new community-owned NHS health centre, and business and workshop units, helping to improve access to rural services and boost the local economy.

In the process Taighean a Chaiseil - which was a joint project by Staffin Community Trust, the Communities Housing Trust and Lochalsh and Skye Housing Association - beat fierce competition from across Scotland at the prestigious ceremony.

The judging panel assessed more than 130 entries in 14 categories from across Scotland and 550 guests gathered to celebrate the 15th annual Scottish Home Awards, sponsored by Ross & Liddell, which attracts more than 60 of Scotland’s leading house builders.

Colin Cumberland, chairman of the Scottish Home Awards judging panel, and head of residential at Ediston Real Estate, said: “In my first year as chair of these important awards, I have been impressed by the quality of the entries and the effort made by organisations. Congratulations to all the finalists and winners and we look forward to the continued improvement of high quality, sustainable new build housing."

Staffin Community Trust (SCT) and its project partners, the Communities Housing Trust and Lochalsh and Skye Housing Association, were unable to attend the awards in person but were delighted at the recognition, and would like to sincerely thank the Staffin community for all the support over several years to deliver the long-awaited and much-needed development.

Around 12 adults and eight children have moved into the new homes. Staffin’s population had reduced by 40 people (6.6 per cent) from 610 residents to 568 people in just four years, prior to SCT starting the project feasibility back in 2014.

SCT would also like to thank all the various project funders including Highlands and Islands Enterprise, Scottish Land Fund, Rural Housing Fund, SSE Sustainable Development, LEADER, Quaker Housing Trust, the Ecology Building Society and Alasdair Gillies without whom the development would not have materialised. SCT was also very grateful for Highland Council support which allowed the contractor to start on site in August 2020.

​Rural Design were the architects for Taighean a' Chaiseil and it was built by James MacQueen Building Contractors Ltd, both Skye-based firms.

NHS Highland became the long-term tenants of the health centre at the development last month and the new facility will be operational soon. Local aquaculture firm Organic Sea Harvest, which employs 18 people full-time, is also hoping to have the internal fit-out work of two business premises, next to the health centre, carried out this summer.
​
Income from all three properties will allow SCT to manage and maintain the development and any surplus will be spent on further community projects.