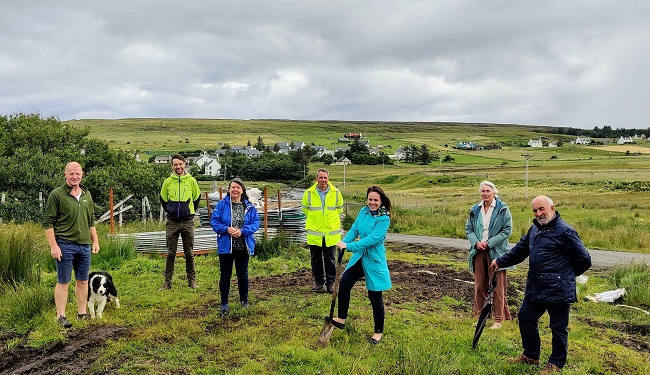 Construction work is underway on a £1.6million housing, health and economic project in Skye.

Six three-bedroom homes, a health centre and two business premises will be built in the next 12 months, with the investment a welcome boost for Skye’s economy following the impact of COVID-19.

Staffin Community Trust (SCT) has developed the project for six years after concerns about the lack of available accommodation locally for young people and families, the falling roll at Bun Sgoil Stafainn and the declining population.

It will be the biggest capital project SCT is involved in to date, with significant Scottish Government support. The common grazing land was previously owned by Scottish Ministers and tenanted by the Stenscholl Township.

Highland Council and Highlands and Islands Enterprise (HIE) funded a housing needs report six years ago, which identified a clear demand locally for new homes to ensure the community’s sustainability.

SCT then held a housing summit attended by Staffin Community Council, the council, Lochalsh and Skye Housing Association (LSHA) and the Highlands Small Communities Housing Trust (HSCHT). A call for sites was later made and SCT, with input from all the relevant stakeholders, agreed the most suitable site was on Stenscholl common grazing close to the school.

The community organisation formed a partnership with HSCHT and LSHA to tap into their expertise and deliver the development, which has overcome significant challenges.

Housing Minister Kevin Stewart MSP said: “This innovative project shows what a community can achieve when empowered to take local decisions. Supported by over £650,000 from the Scottish Government’s Rural and Islands Housing fund and our Affordable Housing Supply Programme, these new homes will help grow and sustain the community as well as providing safe, warm and affordable places to live.

“As housebuilding resumes safely, partnership working like this will be vital to sustain our construction industry, stimulate growth and help us fulfil our ambition to deliver the right homes in the right places across Scotland.”

Kate Forbes, Skye Labour and Badenoch MSP, cut the turf on the site and said: “There is no question that housing is critical to keeping the communities of Staffin and the north end of Skye strong. As we’ve seen recently, even our language is at stake when communities fall in number. The list of people that have expressed an interest demonstrates just how popular new, affordable housing is. I’m looking forward to returning once the houses are built.”

SCT bought the site for £70,000, using a grant from the Scottish Land Fund.

SCT is grateful for a short-term guarantor loan from Highland Council, approved by its economy and infrastructure committee last month, which allowed the contractor to be appointed and the works to commence.

SCT has received more than 10 expressions of interest from families/individuals in the new homes. There are also six notes of interest in the business units, while it is hoped to come to an agreement with NHS Highland about becoming a long-term tenant of the new health centre.

Councillor John Gordon, the Skye and Raasay Committee chairman, added: “Housing and development is vital to the rural Highland economy and I am delighted that this will make such a difference and will strengthen the local community. Staffin Trust are to be congratulated on delivering this project and working with various partners including the Highland Council so that Staffin continues to be a sustainable community for generations to come.”

SCT is grateful to the Stenscholl crofters, the Kilmuir Estate and Staffin Community Council for its backing over the last few years.