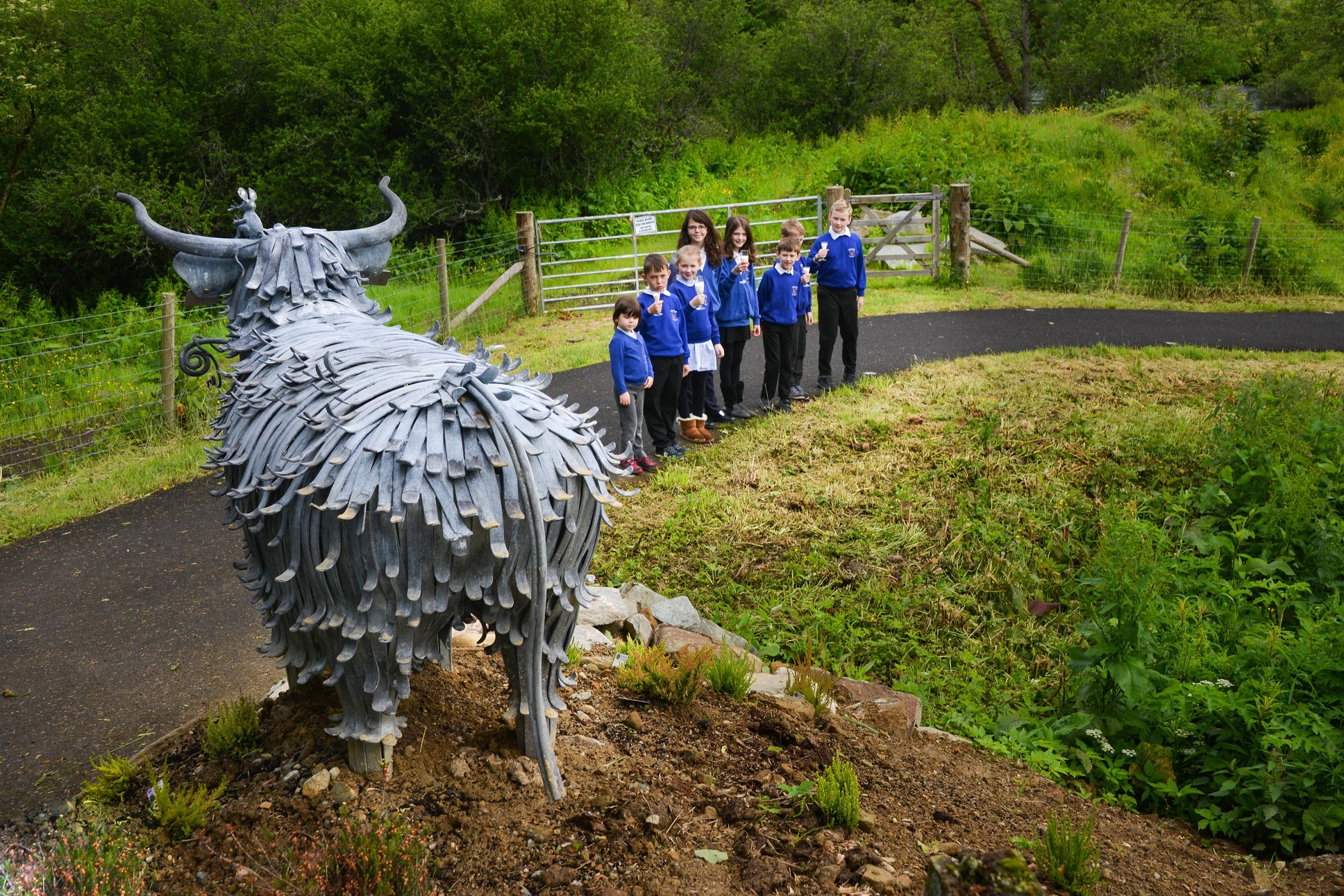 A sculpture of a highland drover's cow, has been set on Sustrans cycle RT7 in Strathyre by the Loch Earn Tourism Information (LETi) group to celebrate Scotland's Year of History Heritage and Archaeology on the award winning BLiSS trail.

LETi commissioned the work using a grant awarded through Sustrans ArtRoots fund. Sustrans is the charity making it easier for people to walk and cycle. They connect people and places, create liveable neighbourhoods, transform the school run and deliver a happier, healthier commute.

Sustrans Scotland’s National Director John Lauder said “Art is an essential part of enjoyment of public spaces and placemaking, encouraging more to travel actively. Our new ArtRoots programme enables communities to make improvements to the National Cycle Network across Scotland. Drover’s Bho is the first completed project from the fund and we think it is a fantastic addition to route 7”

Drover's Bho can be seen from the road and Sustrans path, between the A84 and old Strathyre. The wee coo sits on a heather clad hillock encased by a stone dyke - constructed by community volunteers,  on route 7 near Strathyre's Balvaig Bridge.

Chair of LETi Kim Proven said "Bhó means cow in Gaelic, the language used in Strathyre at the time of the drovers, who would often drive cattle up to 20km per day. This was before the mid nineteenth century revolution in agriculture replaced open common grazing with enclosed fields. We placed the wee Bho on Sustrans cycle RT7 exit near the Balvaig Bridge. This marks an area between the old drove road and old Strathyre, where drovers used to rest up and enjoy local ale and whisky.

"Children from nearby Strathyre Primary School joined LETi to celebrate the launch. Drover's Bho's location is close to the school whose children can enjoy spotting the bramble wielding mouse on her head, the brambles in her mouth and the thistle, placed by the artist as a reminder of LETi's Thistle Award trophy for "Working Together For Tourism" on BLiSS trail art installations 2016/2017.

Artist Kev Paxton has also submitted Mirren to the BLiSS trail 2017. Named after William Wallace's wife; the full sized cow is made of steel flowers, petals and thistles and sits in a visiting artists location at The Lochearnhead Hotel.  Perth College UHI art students are working on their contribution - a sculpture that will celebrate the history and heritage of Loch Earn.

BLiSS trail links up to 25 sculptures, architectural installations and fun ornamental features in the four villages. For example, STILL by Rob Mulholland in St Fillans, Dragon Bike by June McEwan in Lochearnhead, The Look Out by architects Angus Ritchie and Daniel Tylor near Loch Voil and the red telephone box book and DVD exchange outside Balquhidder Village Hall.

Friends of The Loch Lomond and The Trossachs National Park awarded LETi a grant of £1000 which has funded robust and weatherproof BLiSS trail signs promoting the installations and highlighting a website map of their locations.

Be sure to sample real Highland hospitality when visiting the BLiSS trail. Drovers are long gone but local story telling over an ale or dram are still a local tradition in Strathyre and the neighbouring pubs and hotels of LETi villages mapped at www.robroycountry.com/blisstrail