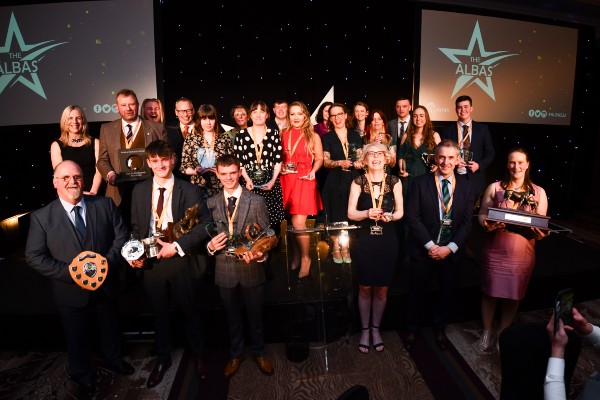 The ALBAS returned at the DoubleTree by Hilton Hotel Dunblane Hydro, with over 180 finalists, event supporters, employers, training providers and industry leaders including the Cabinet Secretary for Rural Affairs and Islands Mairi Gougeon.

Ms Gougeon said: “What a great night spent honouring some hardworking and inspiring people across Scotland’s land-based and aquaculture sectors. I just want to put on record what a truly spectacular group of individuals we have in the finalists and winners. I’m so proud to see the incredible work they are already doing and look forward to seeing them all continue in their careers.”

As well as prizes for Overall Winner, Runner-up and Modern Apprentice of the Year, there were also awards for Higher Education, School Pupil and Secondary Schools, CARAS (Council for Awards of Agricultural Societies), Jean’s Jam for inspirational tutor, the Tam Tod Trophy for outstanding young learner, and the Anna Murray Award for Partnership Working.

The winners and runners-up for ALBAS 2022 were chosen by an independent judging panel made up of influential figures from across the land-based and aquaculture sector, chaired by Keith Paterson of Forestry and Land Scotland.

Rory, aged 17 from Comrie in Perthshire, has completed a National Certificate in Gamekeeping at Drummond Estates through SRUC Elmwood Campus in Fife.

He said: “I can’t quite believe I’ve won two ALBAS awards and to be chosen as overall winner is incredible. It’s a great feeling and humbling to be recognised like this. A big thank you to Drummond Estate, Glenartney, Jim Goodlad (SRUC), my family and everyone who has helped me along the way.”

He said: ““It’s been a great evening, and to be selected as Overall Runner-up and come away with a Higher Education Award is fantastic. I pass on my congratulations to all the other nominees and winners, and thank everyone who has supported me along the way. Also looking forward to the next chapter with Scottish Sea Farms.”

The winner of the prestigious CARAS (Council for Awards of Agricultural Societies) awards was Alicja Blaszczyk, aged 24 from Ormiston in East Lothian, who has been doing a Modern Apprenticeship in General Agriculture at George Brown & Sons through Borders College. Alicja also won the Modern Apprentice of the Year Award and the agriculture industry category.

The Anna Murray Partnership Working Award went to Tilhill and Borders College for their inspiring work delivering exciting forestry based educational training and experiences to secondary school youngsters. The partnership aims to inspire young people to become the new generation of foresters to plant, maintain and manage forests.

Jean’s Jam Award, for an inspiring mentor or trainer, went to Neil Stewart, who works at the Scottish School of Forestry, Inverness College UHI, and who is also a volunteer for Highlands and Islands Blood Bikes.

The ALBAS are organised by Lantra, the sector skills council for the land-based, aquaculture and environmental conservation industries.

The awards recognise the success of trainees in Scotland’s rural sector, while also encouraging employers to think about the future workforce.