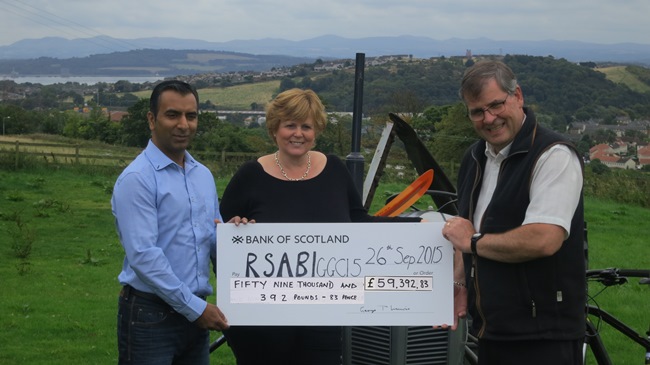 This year's Great Glen Challenge was the biggest yet with 25 teams of four people running, cycling, kayaking and walking 70km from Invermoriston to Fort William.

The total raised so far is £59,392, far exceeding RSABI's initial fundraising target of £50,000. These funds will help RSABI provide advice, support and financial aid to people struggling to cope from agricultural and other land-based industrial backgrounds throughout Scotland.

"We could not be more delighted with the total amount raised and my colleagues and I thank all those who took part in the Great Glen Challenge, our sponsors, Ledingham Chalmers, solicitors, our partner organisations, volunteer stewards and the hundreds of people who have donated so generously up and down the country.

"As everyone knows, this summer has pushed many involved in Scotland’s rural sector to breaking point with prolonged, poor weather and inadequate market returns. If you, or someone you know is not coping, RSABI urges you to call 0300 111 4166."

This year’s winners were Royal Bank of Scotland with two teams from CKD Galbraith following closely behind in second and third position.

George Lawrie, NFU Scotland treasurer and chairman of SAOS, is a long term supporter of this event – with teams from both organisations competing in Great Glen Challenge 2015.  He said:

"This is a tremendous achievement from the agriculture community to raise so much money for such a worthy cause at a time when the industry is struggling to cope with severe weather and low prices.

"Being part of a Great Glen Challenge team and chairman of SAOS, which entered two teams for the first time, you can also see the benefits it brings by way of staff team-building, leading up to and during the event.

"All in all, it was a great event to be involved in, especially with such a large sum raised."

Visit the RSABI website to find out more about their work.

Get a flavour of this year's Great Glen Challenge in this short video from Rural Matters.