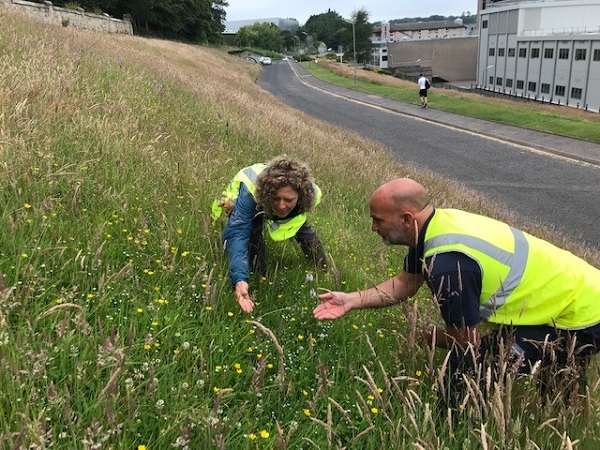 A project to manage hectares of land in and around St Andrews more sustainably will be led by the University of St Andrews to create rich, attractive places for people and wildlife to thrive.

This will allow wildflowers to flourish in a bid to reverse the significant loss of this important habitat over the last century in the UK which is vital for a variety of wildlife for foraging, shelter and nesting.

Among the locations converted to wildflower meadow are University land at the North Haugh, at the Sports’ Centre and around Walter Bower House in Guardbridge. Further sites include St Andrews Botanic Garden and Crail greenspaces in partnership with Crail Community Partnership.

The project is supported by the NatureScot Biodiverstiy Challenge Fund with a grant of £139,677. The grant has, in part, allowed the University to purchase a ‘cut and collect’ mower capable of managing long grass and collecting the cuttings, which reduces the nutrients in the grassland and allows wildflowers to flourish.

John Reid, Grounds Manager at the University of St Andrews, said: “The project will see a transformational change in land management, increasing biodiversity and sustainability and links in with the University’s aspirations to achieve Net Zero and manage a substantial proportion of land for biodiversity by 2035.”

Donald Steven, Grounds Foreman at the University, added: “Diversifying our open spaces will create rich, attractive places for people and wildlife to enjoy.”

Pollinating insects such as bees and butterflies, birds such as swallows and goldfinch, small mammals such as bats and hedgehogs, as well as amphibians such as frogs and toads, will all hopefully benefit from the project.

The transformation will take time and careful management. Wildflowers flourish in nutrient-poor soil, so to begin with the long grass will be cut two to three times in the growing season to strip nutrients from the site.

The Meadows in the Making project will offer opportunities for volunteers to get involved in practical activities, such as hay raking and wildflower seed gathering, wildlife surveys and monitoring, events and training.

To get involved email the St Andrews Botanic Garden on info@standrewsbotanic.org and for more information visit the University’s biodiversity web page: https://www.st-andrews.ac.uk/sustainability/biodiversity/.