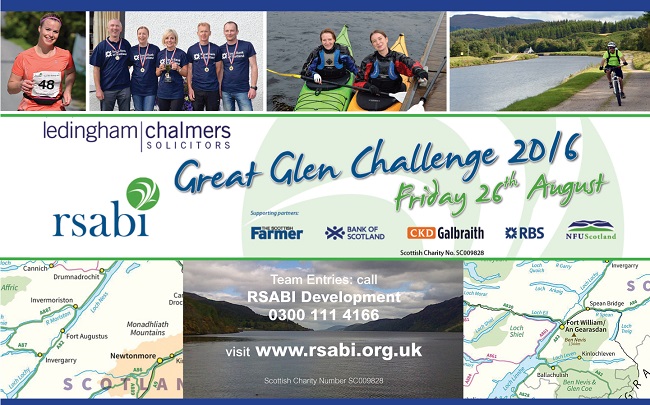 The rural charity RSABI is inviting teams to take part in this year's Great Glen Challenge.

Last year, one hundred competitors from across Scotland biked, kayaked, walked and ran sections totalling 65km along the Great Glen, raising a vital sum of £62,000 for the charity.

Applications are now being invited from teams of four for the challenge, which takes place on Friday 26 August 2016. With a maximum of 25 teams involved, and given the event was full last year, early applications are encouraged.

"I am delighted to invite teams from across the country to take place in this year’s RSABI Great Glen Challenge. Everyone involved last year was enormously proud of an unprecedented £62,000 raised for RSABI.

"RSABI Great Glen Challenge is key to our mission to ‘Help us help them’. Last year we spent £480,000 supporting over 680 people in Scotland who have depended on the land for their livelihood in agriculture, forestry, fish-farming, rural estate work, gamekeeping, crofting and horticulture. People who, due to age, injury, illness or misfortune, now find that they were unable to cope.

"With increasing numbers of people needing our help, we depend greatly on the continuing generosity of our supporters who enjoy an inspiring day out in the Highlands as well as a wee bit of competition among colleagues and competitors. We cannot rest on our laurels and the success of RSABI Great Glen Challenge is crucial to this."

RSABI has welcomed the return of Ledingham Chalmers, solicitors as headline sponsor, with supporting partners The Scottish Farmer, Bank of Scotland, CKD Galbraith, Royal Bank of Scotland and NFU Scotland all involved once again plus a number of returning teams. This year’s event is defended by RBS Agriculture.