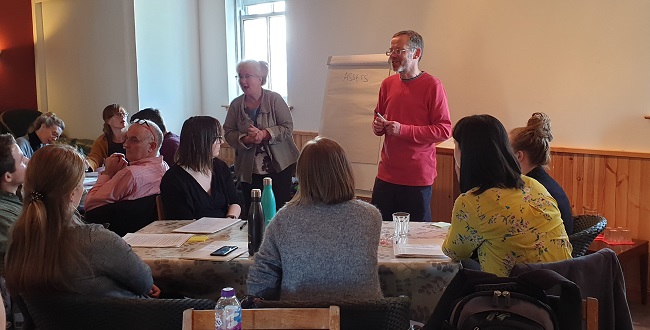 A recent event focused on the contributions of younger islanders in renewing island life and contributing to sustainable island communities.

Fifty people from Scottish and Irish islands gathered in Grimsay, North Uist from 30 September to 4 October as part of the "Smart Islands in Scotland and Ireland: Supporting Enterprises and Young People" project, funded by LEADER in the Outer Hebrides and Ireland. The week week was hosted by local organisation CoDel (Community Development Lens) and the Scottish Islands Federation.

On the morning of 2 October, ten enterprising young islanders told participants what had brought them to Uist, whether returning to their island home or being inspired to make the island their new home. They introduced all the participants to their businesses in Uist as founders of start-up enterprises or social enterprises like the North Uist Distillery, the Scandinavian Bakery, Uist Forest Retreats and an outdoor nursery, developing community sports, reviving a community charity that almost went under, as a climate change artist, or as a young leader seeking to tackle the shortage of appropriate housing that is preventing more people returning or settling.

"Within two weeks of arriving in Uist I had a job. Now I have set up the Scandinavian Bakery, which I wouldn't have done anywhere else."

"Where else would I have worked for a public agency, built a windfarm, built a harbour, and now be managing a major social enterprise, and all so early in my career?"

More than ten other young islanders led sessions on topics such as culture and identity, crofting, tourism, and developing island skills. They included young crofters and musicians, managers and development officers at social enterprises, arts, tourism and Gaelic development officers, and the founder of the Coral Box, Winner of this year's Entrepreneur of the Year at the Young Women in Tourism Awards.

Young traditional musicians on Uist, both Uibhisteach and UHI students, entertained the visitors at a welcome ceilidh on Grimsay.

The Scottish Government's Islands Team joined the gathering to discuss the draft National Islands Plan before it was laid before the Scottish Parliament. Discussions included reviewing the extensive island consultations for the Plan, the implementation of the Plan, measuring its impact, how it can enable the best support for Scottish islands, and what the Irish participants might learn from this dynamic process.

The gathering also gave additional support and insigh into the recent Islands Revival Declaration released by the James Hutton Institute, SRUC, CoDeL and Community Land Scotland, which opened with the statement “that there is credible evidence of 'green shoots' of population turnaround in the Scottish islands, which as yet does not show up in official statistics". You can find the declaration on the Islands Revival website.

The next part of the "Smart Islands in Scotland and Ireland: Supporting Enterprises and Young People" project will be delivering training in Galway in Ireland for representatives from the 30 inhabited islands off Ireland, based on more than a decade of work on Uist focusing on community development, enterprise and young people.

Visit the CoDel website to find out more about the project.