In this event report, Don Morrison from the Scottish Rural Network Support Unit reports on the recent cooperation event in Estonia, and Kim Ritchie from Angus LEADER tells us about the Local Action Group tour she took part in as part of the event.

The recent Transnational Cooperation (TNC) Fair held in Estonia was attended by a number of Scottish representatives including delegates from Angus and Cairngorms LEADER as well as Don Morrison and Alistair Prior from the Scottish Rural Network.

On day one, there was a packed programme which kicked off with a number of presentations aimed at better understanding the Transnational Cooperation (TNC) principles and regulations from various Nordic and Baltic states.

This was followed by a themed speed dating session which was an opportunity to target particular partners for Scottish-based cooperation ideas. This proved to be particularly effective and provided some good leads to follow up on.

Day two started with two themed workshops intended to inspire attendees and provide an opportunity for networking. The workshops on Youth Initiatives and IT Based Solutions proved particularly popular for the Scottish delegates and has provided a number of contacts to follow up on.

After closing remarks from Ave Bremse, and other members of the Estonian Rural Network, attendees had the opportunity to take part in six themed Local Action Group tours. This proved to be an enjoyable and useful conclusion to the cooperation fair and gave an insight into Fisheries Local Action Group (FLAG) in the Peipsi Fishery Area in the Jõgevamaa region. 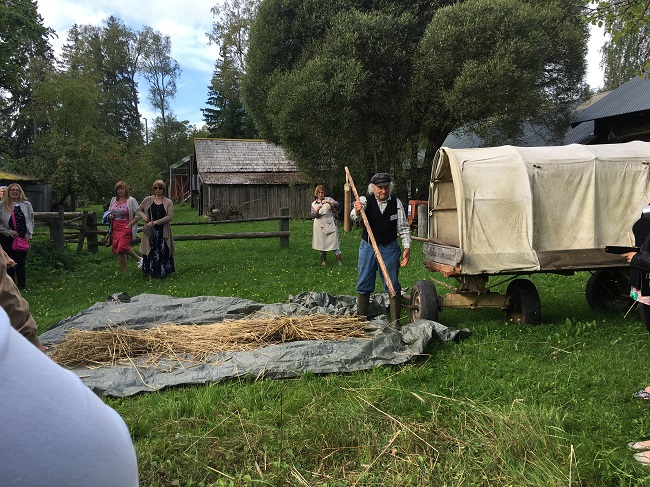 On departure from the fair we had about an hour’s drive to Jarvakandi a small borough located within the Raplamaa County with a population of around 1,300. We visited a local glass blower in his workshop who had secured European funding for his business. He was one of two glass blowers operating in Estonia. We were given a brief demonstration of the process. We were then shown round the glass museum also located in the village.

The museum was built in the beginning of 2000 with support from different EU funds. It showcased the history of the glass

We then departed Jarvakandi for a short journey to our accommodation, Toosikannu Holiday Centre. The Toosikannu holiday centre is surrounded by the biggest safari park in Estonia. On arrival we were seated for dinner and served a traditional Estonian meal of wild boar and potatoes followed by a traditional spiced apple cake. It was very delicious.

We were the shown round the safari in a traditional safari style bus where we saw deer and moose. Following the safari we had the opportunity to use a traditional Estonian sauna followed by a swim in the lake, something that is oart of the Estonian culture.

On arrival we were served traditional mint tea with home cooked fresh sweet bread. We were then shown round the museum and had the opportunity to use some of the old machinery and see them in working action. As well as old machinery the museum was home to a number of old household items that you could pick up and touch.

We were also introduced to everyday work in rural areas in August during the harvest season (harvesting rye, wheat, barley etc.).

The museum has also hosted a number of school children where they can learn about the different activities of farm life and introduced them to some of the crops that are rationally grown in Estonia.

We were the taken to the village centre Salu where we were served Estonian national food for lunch.  The village hall was funded by LEADER and was used by locals on a regular basis. There was also a traditional clay oven located at the back of the premises that was used to fire pottery and was used by local community groups and the locals. This was also LEADER funded.

Find out more about the event in LEADER Cooperation Fair 'hugely beneficial'.