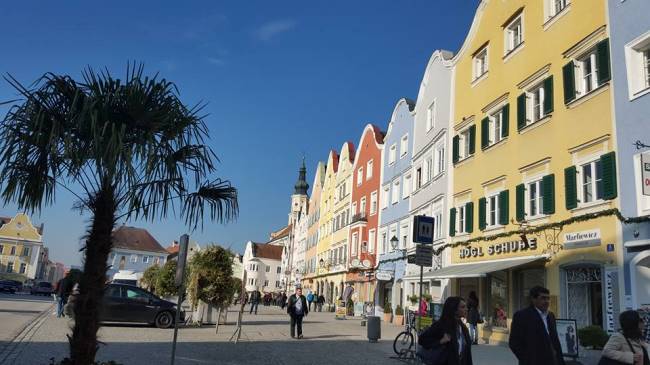 In the third of our event reports from the Scottish delegation to the European Rural Parliament, film maker and young crofter Robin Haig shares her experience.

The European Rural Parliament (ERP) is a biennual three-day event, held only for the second time, this year in Schärding, Austria. It brought together people and organisations from all over Europe (246 delegates from 41 countries to be precise) involved in rural matters. The focus was to produce a Manifesto that could be ‘used to influence European institutions and national and regional governments in their attitudes to, and policies for, rural communities.’ I was invited to attend as part of the Scottish delegation by the Scottish Rural Parliament.

As a filmmaker and young crofter, attending the ERP was a different experience and involved me in an environment that I am not normally party to. I had been to last year's Scottish Rural Parliament (SRP) as a filmmaker busy filming the event, but not as a delegate partaking in it. I was excited that a Rural Parliament existed on a European level and I was keen, as a rural citizen, to understand what this meant.

I was asked by the ERP Coordinators to be Rapporteur for the Working Group on Young People. The purpose of the Working Group was to debate and improve the Manifesto sections relating to young people. Assembling the ideas and wording that arose and feeding this back to the Coordinators felt like a huge responsibility, but as a rural young person, I am happy to have played a part in this process.

On a very personal level, as a result of the ERP I feel I have a greater understanding of what a rural community means, it’s potential and how I can be involved. Whereas once I thought being involved in the community meant sitting on the village hall committee over the age of forty, I now feel inspired to get involved in other ways. I also saw the importance of involving young people of school age in decisions within the community, giving them a sense of empowerment and responsibility, because they will be making the decisions in the future.

One of the Manifesto paragraphs I was involved in addressed reversing the spiral of decline in the vitality and population of rural communities. As someone who left 17 years ago for education and to ‘see the world’ and is about to return, I feel inspired to be part of building strong and vibrant rural communities in Scotland. I will also join my village hall committee.

Having attended the ERP I feel I have a lot to give back to Scotland from what I learnt there. Top of the list is sharing with my rural peers how they can be involved in rural matters and decision making, and encouraging them and rural organisations to be involved in the next SRP, which will be held in Brechin in October 2016. I was absolutely inspired to see that so many people from all over Europe were passionately working on rural matters and that there is a strong rural voice. I also had a similar feeling from the SRP. It was interesting to get the chance to meet others from the UK and Ireland and hear about initiatives they were involved in. Similarly, it was fantastic to build relationships with the other Scottish delegates, and I am sure these connections will bear fruit in the future.

More from the Scottish delegation