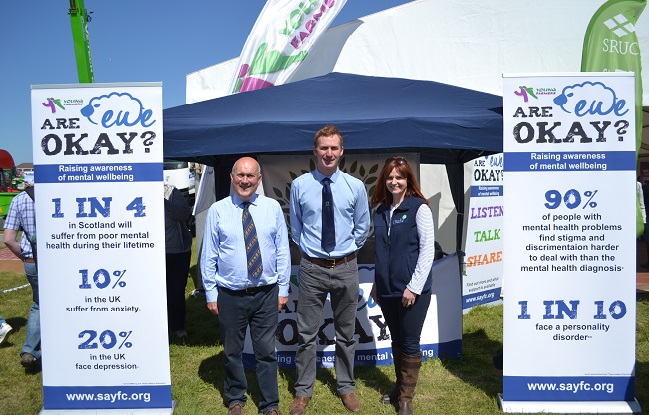 The Scottish Association of Young Farmers' Clubs launched the 'Are Ewe Okay?' campaign at the Ayr Show on 14 May, with activities officially starting on 16 May to coincide with Mental Health Awareness Week.

The campaign will be delivered regularly through social media with the aim of  targeting the association's audience of young people living in Scotland's rural communities. By raising awareness of poor mental health triggers and conditions, they hope to aid members with the knowledge they need to recognise the signs, and how to seek help if someone is suffering.

"SAYFC has 3500 members who are aged between 14 and 30 years old so there are so many different life events and pressures going on during this period that can influence how they feel including education, relationships, employment, health and finance."

Nine out of ten young people facing poor mental health said they received negative treatment from others with nearly half noting this happened monthly, weekly or daily. Mr Jamieson said this was key to why 'Are Ewe Okay?' would be a focus for Scotland’s largest rural youth organisation.

"This statistic is one of the reasons SAYFC has chosen to encourage those all-important conversations and break the stigma surrounding mental wellbeing. It’s about looking out for each other by taking the time to listen, offering a situation where someone feels confident enough to talk or by sharing information to aid our members. Everyone can get involved by just asking 'Are Ewe Okay?'"

You can follow the campaign and pledge your support on the SAYFC website at or keep up-to-date via social media using the hastag #AreEweOkay?